The Adventure Wall: Nice To Meet You. Wanna Play?

Six months ago, I moved from Southern California, a center of culture and art to Colorado Springs. Being an admittedly somewhat snooty-about-living-in-Los Angeles person, I was apprehensive about what I would find in my relatively small new town. I knew there would be great hiking and skiing, which I wouldn’t take advantage of since my only skiing experience ended in me shivering over hot chocolate with a mild concussion. I was excited about all the outdoorsy things coming my way but, what about museums and concerts and, you know, culture?

After I had been here about two days, I went from being apprehensive and snooty to intrigued and then to amazed and finally to flat out overwhelmed by how much there is to do. Just to get started there are 13,000 acres of open space to explore, 151 parks, 249 miles of biking paths, 265 miles of running and hiking paths, 48 museums and even more fun places in which to find an adventure. And even better, it’s all within a twenty minute drive, unlike L.A., where a half hour drive can take two hours of stop and go traffic, wasting your day, and spirit, of adventuring.

How was I supposed to pick something?  Besides the parks, hiking and biking paths, there was the Air Force Academy, the Cheyenne Mountain Zoo, the Denver Aquarium, Manitou Springs, Pikes Peak, the Cog Railway, the Manitou Incline, as well as the 48 museums.  My head began to spin with places I wanted to go and things I wanted to experience. I had about 50 brochures, flyers and post-it notes with scraps of information on them representing adventures I wanted to have. I needed a way to keep track of it all, organize it and decide what to do first.

One afternoon as I sat staring at a huge wall in our living room thinking that my one nice painting wouldn’t do much to stun the blank off a wall that size, an idea began to form. THAT space would be the perfect place for keeping track of my adventures. So, I bought two bulletin boards and designated one as the “To Do” board with all the brochures and now neatly written out ideas and the other as the “Done” board with pictures of the adventures we had been on. 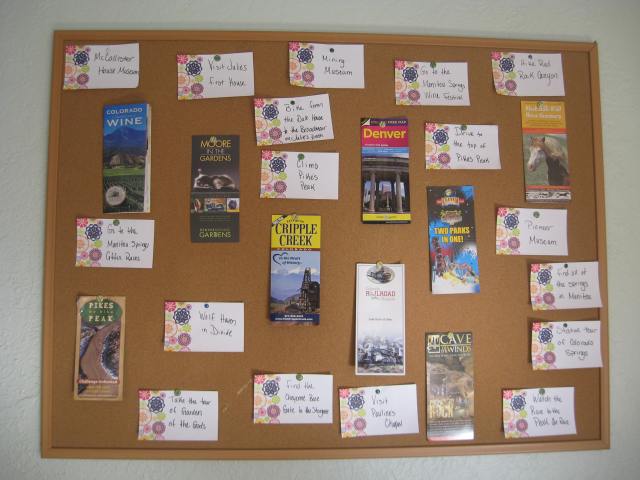 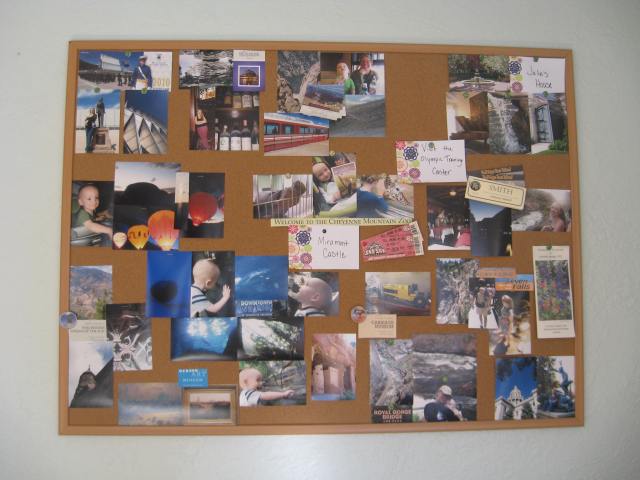 Since the Adventure Wall has been up for six months already, the “Done” board includes the Denver Art Museum, the Air Force Academy, Cheyenne Mountain Zoo, The Will Rogers Shrine of the Sun, the Denver Aquarium, the Royal Gorge Bridge and Dinner Train, Seven Falls, the Penrose Carriage Museum, the El Pomar Foundation Home, the Cog Railway, the Broadmoor Hotel, and the Miramont Castle. Even though they are done, I plan to write up a few of the better adventures and post them.

The “To Do” board has still on it the Mining Museum, Manitou Springs Wine Festival, hike Red Rock Canyon Park, Manitou Springs Coffin Races, drive to the top of Pikes Peak (fine), climb Pikes Peak (yikes!), hike the Manitou Incline (even bigger yikes!), visit the Pioneer Museum, watch the Race to the Peak, visit Pauline’s Chapel, take the official Garden of the Gods tour, Wolf Haven and go to the Denver Botanic Gardens, just to name a few. I tend to add more activities every few weeks.

And so, in the spirit of adventure and fun, I decided to include anyone who wanted to come along on my adventures. I’ll be writing about almost everything we do, good or bad, fun or not so great and posting the stories. I love to take pictures, so my camera will come along so that I can show you my beautiful new town and document every adventure or mis-adventure.

If you want to be even more involved in the adventuring, I will open the Adventure Wall up to suggestions and if it’s not too expensive (the budget is pretty small), I’ll do it and write about it. So, get out your internet search engine and come up with something for you and I do together, now matter how far away you are. I’ll even give you credit for the idea. Can’t wait!

Next up: The Manitou Springs Coffin Races where people dress up, decorate wheeled coffins and hurl themselves down the steep main street of Manitou Springs.  No, really.

5 Responses to The Adventure Wall: Nice To Meet You. Wanna Play?